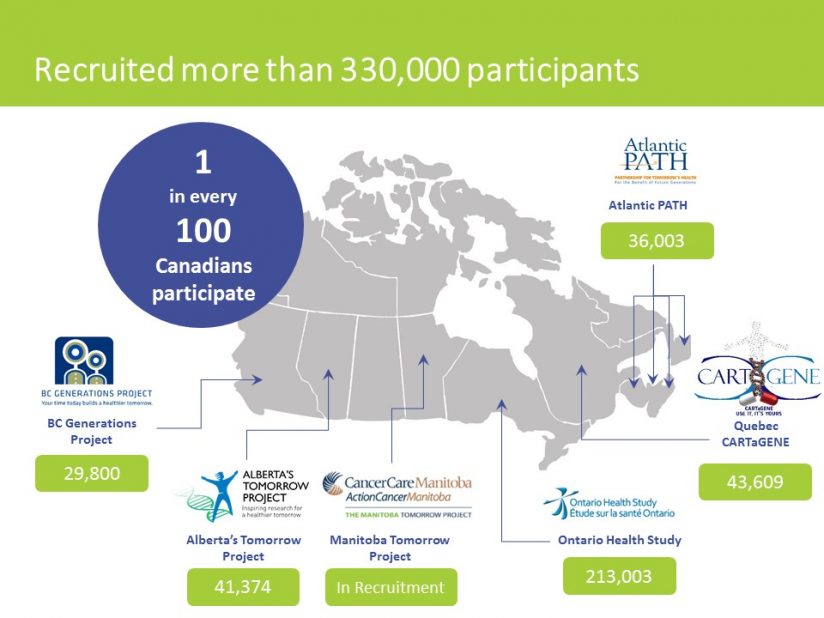 Ottawa, February 3, 2014 – The Canadian Partnership for Tomorrow Project, one of the largest research platforms in the world has succeeded in engaging Canadians across the country and reached its goal of enrolling close to 300,000 participants in Canada. That is about 1-in-55 Canadians between 35 and 69 years old, voluntarily engaging in a project that will help researchers understand the causes of cancer and other chronic diseases.

“This cohort of 300,000 Canadians will make an invaluable contribution to national and international research. Cohort studies have shown that recruiting healthy people and following them over a long period is a powerful way to establish a cause-and-effect relationship between cancer and its causes,” explains Dr. Heather Bryant, VP of Cancer Control at the Canadian Partnership Against Cancer.  “The Canadian Partnership for Tomorrow project is an excellent platform for exploring multiple factors that can influence the development of cancer and chronic disease in individuals, including their genetic makeup,  personal lifestyle choices, general health status, and cultural background.”

To date, over 100,000 blood specimens, as well as thousands of additional biological specimens have been gathered and stored for future analysis. The intention is to continue to follow these participants over many years to track their progress and health outcomes.

Some of the Canadian Partnership for Tomorrow Project participants will also be assessed by a one-time magnetic resonance imaging (MRI) scan of the brain, blood vessels, heart and liver. By collecting, studying and comparing the data, researchers will be able to answer questions about why some people get cancer and/or other chronic diseases, such as diabetes and heart and lung disease, while others don’t.

Since launching in 2008, the project with its five regional studies have been working to engage Canadians aged 35 to 69 to contribute to the initiative through British Columbia’s BC Generations Project, Alberta’s The Tomorrow Project, Ontario’s Ontario Health Study, Quebec ‘s CARTaGENE, and Atlantic Canada’s Atlantic PATH. There is still opportunity for more Canadians to get involved, as most regions are still enrolling participants. They are also reaching out to those who have filled in questionnaires to provide a small sample of blood to be stored for future research.

To date more than $78 million has also been invested by other national and provincial cancer, healthcare and research organizations across the country. Added to this, in 2013, the Canadian Partnership Against Cancer and the Heart and Stroke Foundation announced a first-of-its-kind partnership between the cancer and cardiovascular research communities, to strengthen the Canadian Partnership for Tomorrow Project in its research of chronic disease.

The goal is to have the data platform ready for researchers to use by mid-2015. With ongoing support, the Canadian Partnership for Tomorrow Project has the potential to inform changes in policy and practice that will help to prevent life threatening disease, enable research for decades to come, and ultimately reduce the impact of cancer on Canadians in the future.

About the Canadian Partnership Against Cancer

The Canadian Partnership Against Cancer works with Canada’s cancer community to reduce the burden of cancer on Canadians. Grounded in and informed by the experiences of those affected by cancer, the organization works with partners to support multi-jurisdictional uptake of evidence that will help to optimize cancer control planning and drive improvements in quality of practice across the country. Through sustained effort and a focus on the cancer continuum, the organization supports the work of the collective cancer community in achieving long-term population outcomes:  reduced incidence of cancer, less likelihood of Canadians dying from cancer, and an enhanced quality of life of those affected by cancer.